The Evolution of Writing Through the Ages

While the world can’t exist without writing, modern technologies are influencing the ways people communicate. Here are a few quick facts that illustrate the changes in the history of writing.

Above said proves that writing becomes digital, and this tendency keeps increasing. According to a 2018 research, on the average within one minute people around the globe send 18 million texts, 187 million e-mails, 38 million messages on WhatsApp, and make 3.7 million inquiries on Google.

It’s obvious that writing is not endangered. However, with the changes in the field of technologies, certain conventions that ensure order to the written word face challenges and are being altered. Every day mass media share the following stories:

Although the changes in the field of writing become more abrupt, today they are no phenomenon.

Being a system of graphic marks, writing which represents the units of each particular language has been invented independently in three regions of the ancient world – Mesoamerica, China, and the Near East.

The first one was the cuneiform script, created ca. 3200 BC in Mesopotamia (present-day Iraq). This system of writing is the only one that has been traced to its earliest prehistoric origin. The antecedent of the Mesopotamian cuneiform script has originally developed as a system of counting and recording goods with the aid of clay tokens.

The evolution of the human writing – from first tokens to pictography, the syllabary, and finally, the alphabet – shows how information processing has been developed and adjusted to deal with the ever-growing amounts of data. The progress wouldn’t be possible without the evolution of writing tools, technologies, and evolutionary writers who brought major changes into the course of the history of writing.

The Changes in Writing Over the Course of Time

Writing has always been evolving to correspond to human fashions and needs. Having spread into various niches of life, it’s been adopted into marketplace, law, learning, politics, religion, and storytelling.

A good example of writing being shaped by a powerful source is politics. For instance, in1926-1927 the Soviet Union government held a universal campaign to make the citizens speaking in Turkic languages switch to a Romanized type of alphabet from the Arabic writing they’ve been using. The purpose of this step was to split the Muslim countries of the Soviet Union from the rest of the Islamic world.

The modern roman cursive script has been evolving over a few centuries, basically from written capital letters. With the pace of life speeding up, people have to write faster, too, which makes writing not as functional in some places.

Brush, pen, and handwriting underwent shortcuts in the forms, and that’s how roman letters of lower case evolved out of the capitals. Not a few letters merged and joined in one to create various ligatures between the forms. As an example, & – the ampersand, developed from the letters e and t being joined into one symbol (which stands for the Latin conjunction et – ‘and’).

Human heritage in writing has partially been shaped thanks to artistic, figurative imagination, creativity, and love to celebrating skills.

In European countries of the medieval age, there was no need in identity for all existing letterforms. Variety – especially in capitals of the gothic period, was encouraged. The Book of Psalms (otherwise called the Mainz) is a vivid example of the capital letters variety. Large red capitals were typical for black-letter printing, while thin black ones were common for gothic writing.

Technologies in writing keep changing constantly. Over the past few thousand years, there have happened several big shifts in materials used to write upon.

For example, in China, such writing materials as bronze, bone, wood, and bamboo had been replaced by paper around the 3rd c. CE.

In the Roman Empire, during the first centuries of Christianity, a major change happened with the move from papyrus scrolls to the book-shaped artifacts made of vellum or papyrus. Later, these notebooks evolved into great manuscripts.

Starting with the 15th century, the luxury European manuscripts were written with a quill pen or printed with colorful pictures and various lettering styles. By the end of the Middle Ages, the expensive soft vellum was displaced by paper – a cheaper and widely available material.

Printing – one of the most important innovations became a method of creating big numbers of absolutely identical written copies of any written samples. In the Eastern part of Asia, printing with the help of carved blocks of wood became a reliable and inexpensive method to reproduce multiple documents and books copies since the 8th c. CE. A major change had happened five centuries ago, when in Korea, and later in Europe, the invention of movable metal type opened up further opportunities.

In Europe, the availability of printed books often determined the spread of knowledge; this tendency lasted until the Age of Enlightenment.

Writing in Our Age

Today’s society is living through a new massive shift in the writing order. It’s a time of the revolution, and the progress in digital technologies is its greatest trigger. But the end result is yet to look out for.

Using screens, keyboards, and electronic writing helps writing to happen faster and be reproduced easier. Writing can be distributed to any part of the world and is accessed within seconds. Being a social activity, it creates bonds within most various communities, and the impact of this appears to be huge.

Completely
anonymous
We have taken appropriate security measures to protect you against loss, misuse or alteration of the information collected from you. Please read our Privacy Policy to learn more.

Testimonials
I do like my essay! I have an excellent mark! You can't be more professional!
(Ryan, VI)

Many thanks to my writer! He has managed to handle my problem on time!
(Eric, PR)

Why not Turnitin?
secure payments

For security reasons we do not store any credit card information.

Support team available 24/7
Chat Now Call Free!
Press "Call free!" and select "Call" from the Skype menu. If you are not using a headset or a microphone to make a call, you have to press the "Mute" button before making the call to use the dial pad. You need the dial pad (press "Show dial pad") to navigate your way to speaking with a representative. After you have reached the representative, press the "Mute" button again to speak. Smartphone and tablet users should follow the same procedure. 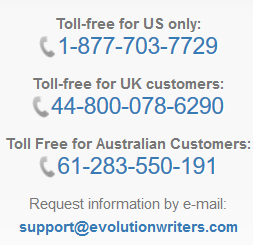